5 Reasons You Should Blame “Them” 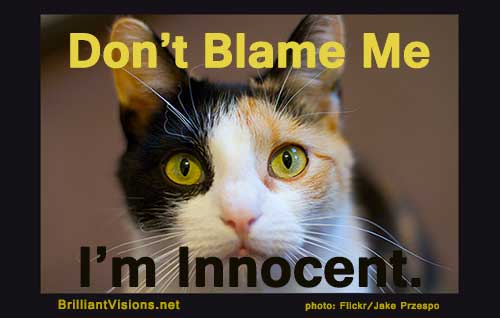 They made this mess. It’s their fault. If it weren’t for them...

Oh, there are so many ways to invoke blame!

Here’s the raw truth about blame: In the heat of the moment, it seems easy and natural to lay blame on others. But operating from a stance of blame is more harmful to yourself than it is to the entity or person you are blaming. And blame is flat-out a relationship buzz-kill.

We all blame – it can be a natural default. (So I’m not blaming you for blaming!) And some hidden sliver of ourselves gets a degree of benefit from blaming. Let’s take a look at how effective those benefits are:

1. You get to be the helpless victim.

Let’s say you are late to meet a friend for a movie. She has been waiting outside the theater, worried about your safety and becoming increasingly angry that she will miss part of the movie if she continues to wait for you. Finally, you come scurrying up to the ticket counter at the last second and the first words out of your mouth are, “Oh the traffic was so awful, those stupid construction people! I thought I would never get here!” Ahhh, so it was the traffic that “caused” your lateness. Not that you gave yourself 14 minutes to make a 16 minute drive. Now, instead of giving your friend empathy over the fretting she did while waiting for you, YOU get to be the victim of a traffic jam. If you pick your friends right, she will feel badly for you and pile on the pity. Oh, poor, poor you. And isn’t that charming?

2. You get to avoid growth.

Your choice to blame is a choice to stay small. Indeed, blaming gives you an escape from learning how to be a better human being. When you deflect responsibility for your circumstances onto your thoughtless family, that unreasonable client, the idiots on the school board, those inept carpet installers (oh the list can go on and on, can’t it?), you also deflect the focus away from yourself and any self-reflection that might reveal something new and useful about yourself. All that blame gives you zero space to reflect on things like: What is my contribution to this? Which of my behaviors, decisions and beliefs set the stage for this circumstance to find its way into my life? Or – Why do I seem to repeat certain patterns (why do I always get the inept carpet installers?!) If you are willing to go to a deeper level with this, I invite you to take the risk of asking yourself what gift this circumstance brings – how is this problematic scenario a fertile ground for you to make a life-altering shift or learn something about your core self? Or, you could simply take the easy way out and keep blaming others.

3. You get to propagate blame trickle-down.

Yes! You can be a blame catalyst. A contagious spreader of blame germs! When you blame another, they are egged on to blame yet another person or entity. Kind of like a game of hot potato. The downside to this game is that you are teaching your kids, co-workers, clients, friends and that lady behind the counter at the DMV that blaming is your shtick. This means you are fair game – they get to blame you, too! (Actually, this is the exact conversation model at play in the U.S. at the moment – politics aside, surely you can see how brutally ineffective this blame-tag is.) Perhaps it’s time to break the blame habit? Start by simply noticing each time you make a blaming statement out loud. Just notice it, catch yourself in the act. No self-judgment on this – remember, you are in a learning phase. When you are ready, begin to catch yourself before the words come out of your mouth. You may end up saying “never mind” a lot, but no matter. And this is not about stifling your truth – it’s about breaking a habit that degrades relationships and erodes your credibility. You still get to speak your truth, but via productive, relationship-strengthening, heart-opening communication. Unless, for some reason, you prefer distant relationships filled with harsh language and biting sarcasm.

I remember a few years ago, I found myself in a righteous uproar over BP oil spill in the Gulf of Mexico. I was silently blaming BP, the U.S. government, drivers of gas-guzzling cars, Henry Ford himself! And ooooooohhhh, I was so right. They were so wrong. Ha! I had won my mental argument with society! But what, exactly, had I won? The oil was still gushing, animals were still being coated with oil, and beach communities were still in peril. My blame was accomplishing nothing but vitriol within myself. Now, anger and frustration are perfectly healthy feelings to have. And of course the situation must be assessed – it’s important to learn why and how this happened and how to prevent future spills. But pure blame (transferring all responsibility to the other parties) is a dead-end street to a pile up of solution-less ire.

As soon as I realized I was caught in the blame trap, I stepped back. I began to find my own contribution to the situation – yes, MY contribution. No, I did not cause the spill directly. But I do routinely buy gas. I have not taken steps toward finding an alternative fuel transportation mode. I contributed in my own tiny way. And in owning up to that – in making this OUR problem instead of THEIR fault – I began looking for appropriate actions to contribute to the solution. For starters, I donated to the Audubon Society and used my social networks to encourage others to join me. Small, but something positive. As blamers we have a small victory in being right. But when we release blame and own our part, we begin to include ourselves in the situation… and, ultimately, in the solution. A healthy society depends on this spirit of cooperation. Blame cuts cooperation to the quick. Just watch any politician on any side of any issue.

5. You get to play the role of martyr (when engaged in self-blame).

This one’s a little different. Instead of blaming others, you are blaming yourself. Yes, it’s great to take responsibility and to find your part in the situation. But self-blame is just as stifling as blaming others. Suppose you’ve just spilled red wine on your friend’s white carpet. I think we can make a clear factual case that you have caused this mishap. But when you lurch into a self-demeaning tirade (either externally or silently) of “Oh I’m such a clutz! I am so stupid! I can’t believe I did this!,” you kind of circle back around to becoming the helpless victim again (see #1). All blame diminishes compassion, but self-blame may be the most soul-eroding of  all. Yes, it’s good to admit to and apologize for the wine spill and help clean it up and pay for a steam cleaning service – make it right with your friend. But to marinate in compassionless self-blame does nothing to contribute to the solution and actually squashes your spirit.

We all do this blaming thing to some degree. Just notice how it dampens your energy and vitality, and keeps you small. And feel free to share whatever you are noticing in the comments below!

Click here to cancel reply.
« Why Failure is FANTASTIC!
Writing with Impact: Mind Your WEs & YOUs »
...